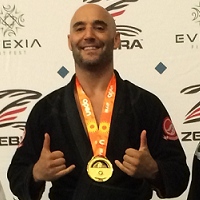 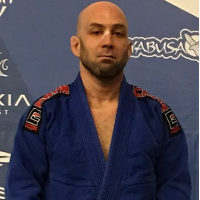 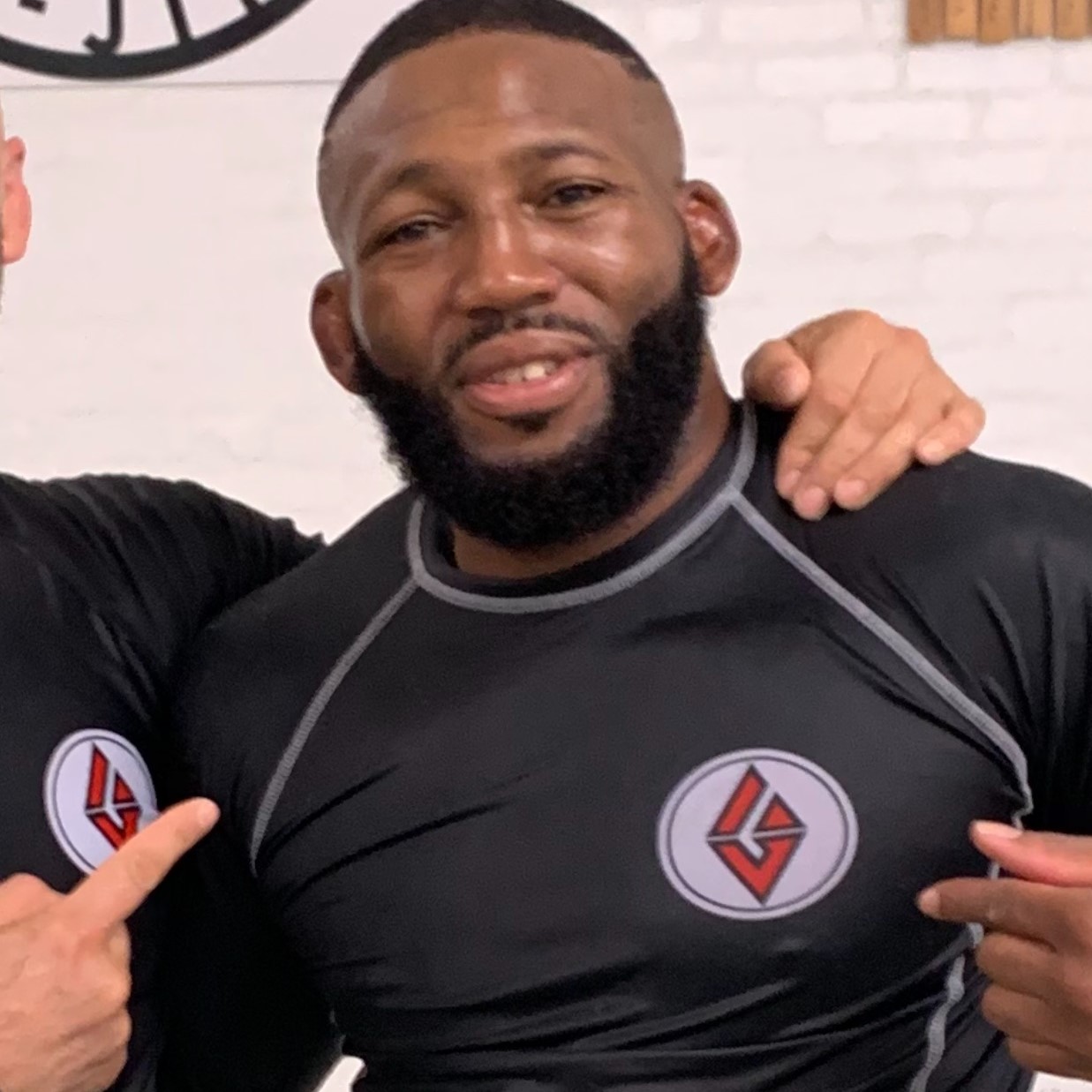 David Ginsberg is a 5th Degree Black Belt in Brazilian Jiu Jitsu, ranked by the legendary Master Mario Sperry. Professor Ginsberg (“Coach Dave”) is amongst the highest ranking Americans in the Northeast, as verified by the USBJJF and IBJJF. He has been a full time BJJ and MMA instructor since 1997 and coached gymnastics and fitness as far back as 1988. He was the first or among the first New Englanders to receive a Black Belt in BJJ (2003), to win back to back Gold Medals in The Pan American Games of Brazilian Jiu Jitsu (2002 & 2003), to win multiple matches and medal on the Black Belt Level in International Competition (2004), to coach a student to a World Title at the IBJJF World Championships, to be appointed as a licensed MMA official in Massachusetts, and to judge a UFC Title Fight. Coach Dave also owns numerous NAGA, New England and Grappler’s Quest No Gi titles from 1996 to 1999. He has trained Olympians in Judo and Synchronized Swimming and professional athletes including NBA player Glen “Big Baby” Davis.

Coach Dave’s martial arts teaching style is informed by his background in gymnastics and dance and his degree in Buddhism & Creative Writing. In gymnastics, he is a title-holder on the still rings & floor exercise & he was coached, over the course of a decade, by 3 Olympic coaches. His academic studies included numerous merit-based scholarships and coursework at Oxford University, The Central Institute for Higher Tibetan Studies in Sarnath, India and Amherst College, and culminated in his graduating Summa Cum Laude from U Mass Amherst, and he was granted membership into the country’s oldest honors society, Phi Beta Kappa. Coach Dave believes in tailoring martial arts, techniques and movement to suit the needs of the practitioner, and he is honored to be a part of the wellness and self-empowerment process of individuals who are starting a martial arts practice or hobby for the first time as well as lifelong martial artists.

Coach Dave’s extensive personal experience in competitive athletics and his interest in wellness, spine and joint health and longevity have led him to develop close professional relationships with many in the Sports Medicine Community including a leader in his field, Jake Kennedy. He believes that more important than the short gain of a great martial arts technique or fitness circuit is that one’s martial arts practice be conducive to long term health and injury-prevention. Longevity, healthy posture, and knee, spine and shoulder health are of utmost importance on the mats and off. Coach Dave’s personal philosophy on competing is that it is for those who chose to challenge themselves in that way, but it is by no means a requirement or something that people should be pressured to do. His personal philosophy on MMA is that it is for those who are drawn to it and have a deep desire to compete in it; and although he enjoys training lightly and with control, he has never been interested in competing because it goes against his personal practice of non-violence.

Mike has been involved in sports and martial arts since his youth, training in karate, wrestling, Jeet-Kune Do, and boxing, in addition to competing at an amateur level in mixed martial arts (mma) and over a dozen Brazilian Jiu Jitsu tournaments. Having been raised in Hawaii, Mike is also an avid surfer, surfing all over the Pacific Ocean, including in Fiji, Hawaii, Guam, and throughout California. Through his years in martial arts, he has had the pleasure of training with UFC, Strikeforce, Pride FC, and Gladiator Champions and veterans, including Bobby Southworth, Lil’ Dave Velasquez, Brian Johnston, and Brazilian Jiu Jitsu black belts Erik Benaquisto, Claudio Franca, and the former boxing coach for the University of Santa Clara California boxing team, Jose Uribe. Mike is also a Personal and Group Fitness Trainer. Mike is also a 2 time NAGA champion and regular competitor.

Professionally, Mike has over 15 years experience as an Urban Planner and Zoning Inspector managing and permitting a wide variety of develoPMent projects and currently works for the Town of Watertown.

John Howard is a 2nd degree black belt under Dave Ginsberg. John competes at the highest levels of BJJ and MMA; he holds a 29-19 W-L record with matches in UFC, WSOF, and CES MMA. 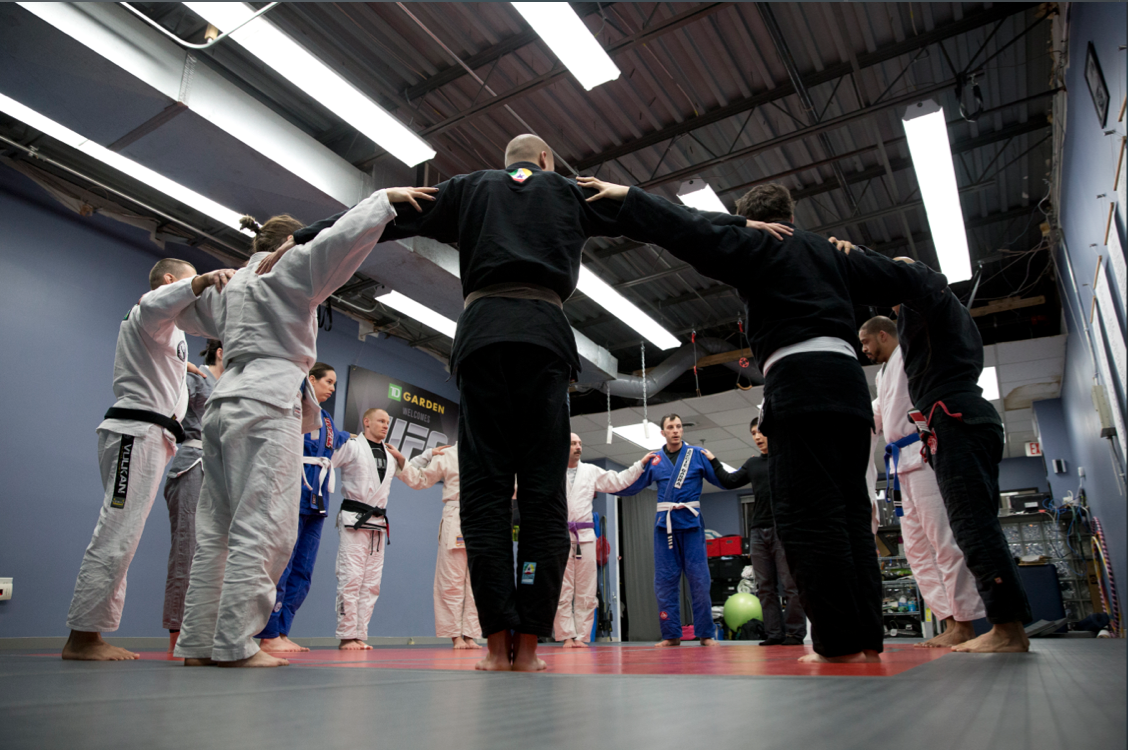 "A great teacher! I will always remember Dave introduced me to BJJ in 2003 at the Boston University jiu jitsu club, where he was providing instruction at the time for any students who wanted to try it out."

"Coach Dave is amazing. Ive been a student of his since I was 14 and helped me lose weight, excel in school/college, and win the world championships! Whether your looking to lose weight or compete, are a beginner or an expert coach Dave can help you achieve your goals!" 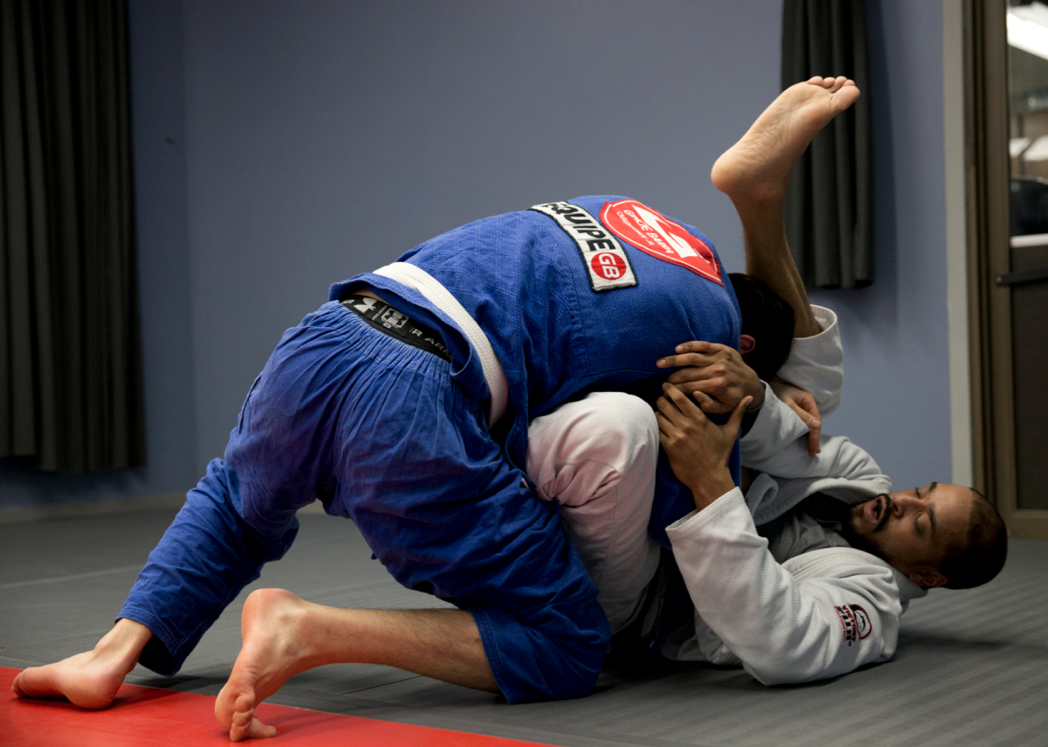 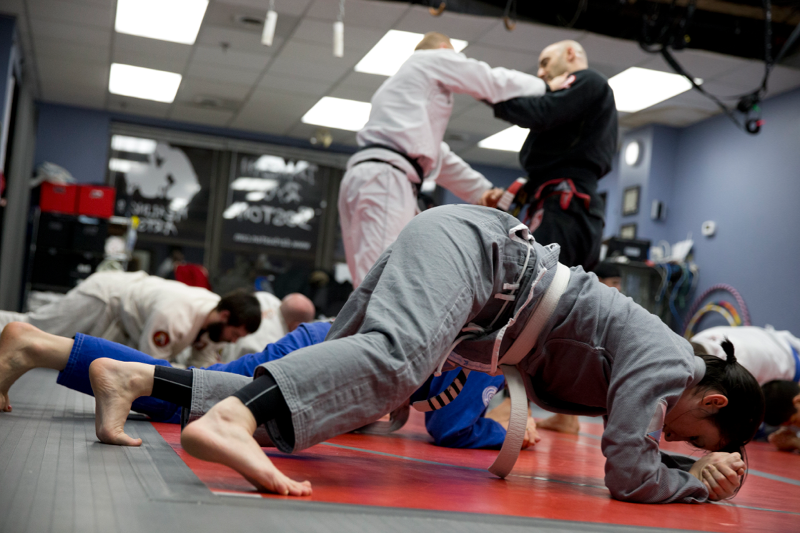 "The effort Dave puts into constant consideration of safety pays off. It starts at the top and becomes a school of culture. I've trained in a lot of dojos and Ginsberg Academy is the safest and most positive I've experienced."

What is Brazilian Jiu Jitsu?

Brazilian Jiu Jitsu is a martial art, combat sport, and a self defense system that focuses on grappling on the ground. BJJ is unique in that its ethos is not about striking and power, but technique and strategy, using superior positioning and leverage to overcome brute strength. This makes BJJ uniquely effective for all body types and conducive to long term practice, physical wellness, and longevity.

What should I expect in my first class?

A class generally consists of a light warm-up, jiu jitsu-specific solo movements, M-100’s which is an in-house-created exercise circuit lasting about 3 minutes, 1 to 3 Brazilian Jiu Jitsu techniques, and 3 to 6 rounds of drilling the techniques and/or optional light sparring.

Expect to sweat. Drink water often. After class, you are encouraged to take a few minutes to cool down, lightly stretch, or relax. Then shower with hot soapy water!

Please note: if you have any condition, injury, ache or concern, please notify the instructor and do not attempt to push yourself in any way that is not healthy for you! Proper training makes us stronger and healthier.

What should I bring and wear to class?

A ‘gi’ (jacket and pants) is advisable. In the meantime, wear comfortable clothing that is not baggy, and with no exposed zippers or buttons. It is advisable to wear long pants and long sleeves.

Wear a mouthpiece and cup, if applicable.

Are there any gym rules I should know about?

THE GOLDEN RULE: Always respect your body and your feelings, as well as those of your partner’s, teammate’s and anyone on the mat.

Please refrain from swearing on the mat and from superfluous conversation during class.

Practice techniques with control, lightness, flow and communicate with your partner about comfort-level and intensity.

Please only sit on the couch in dry clean clothes.

Beginners should not spar unless given permission by Coach Dave

What if I don't feel comfortable with an excercise or training partner?

Advocate for yourself. Be your own boss. Don’t do a move, technique or exercise if it does not feel right, safe, constructive

Everyone is here to support you. Don’t waste energy feeling self-conscious if you can’t keep up during an exercise circuit or learn a move as quickly as it seems someone else does.

Always remember that the exercises and techniques exist to make you stronger; if any exercise or technique does not feel safe and constructive to you, don’t do it.

What do I do if I arrive late to class?

If you arrive late for class and miss the group bow-in, bow on the mat and slowly, quietly do 50 squats and 25 push-ups (or other exercises if these are not good for you) at your own pace for your warm-ups.

What makes Ginsberg Academy different from other schools?

We circle up and bow-in at the beginning and end of each class. We bow to direct our focus and clarify our intention to train intelligently and effectively. Also, to show respect to ourselves, our training partners, teachers, students and whomever else one may choose to include. As one stands in the team circle, one bows to the center, to one’s own center.

We say “Team!” when we bow in. We could just as well say “Family!” The point is that while we are practicing, whether learning a submission hold, playing tag or drilling a technique or, eventually, ‘rolling’ (controlled sparring), we are not in a competition. This is not a ‘fight club’. We are taking care of ourselves and one another. We will only do a move or movement if we are sure it will cause no harm to our partner. Note, even in sparring, we have partners, not opponents.

Attend all classes on a single day

Two months notice is required for cancellations of contracts.

All private lessons and appointments will be charged full fee unless cancelled or rescheduled up to 48 hours in advance.